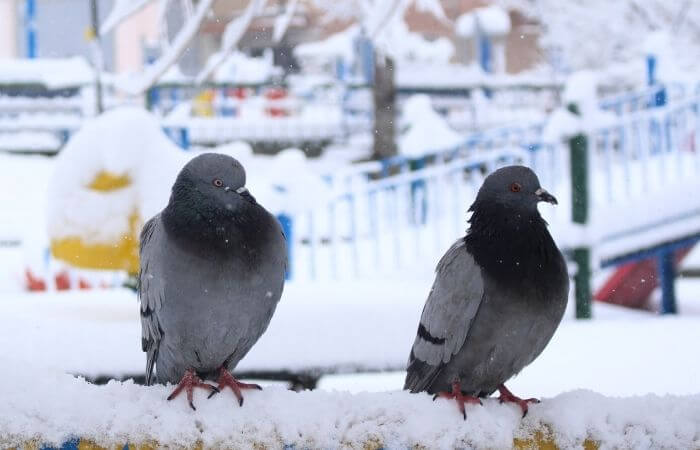 Urban pigeons eat much the same in winter as they do in warmer months.

Humans continually discard food whatever the weather so the supply for urban pigeons never dries up.

For rural pigeons, it’s not so simple.

Food sources are fewer and the pigeon’s diet will adapt accordingly.

Winter is usually a time of scarcity in the animal kingdom.

Pigeons have the same yearly struggle for survival as other species. As pigeons don’t migrate they face some tough months.

The pigeons that inhabit our cities are pretty much well cared for.

They have adapted to modern urban living and are well versed in taking advantage of their opportunities.

Human activity doesn’t stop with the seasons; it is continuous all year round.

Winter may make things harder on those feral pigeons, but they are quite capable of surviving due to constant human production.

They don’t change their eating habits or food sources because of the changing seasons.

Admittedly, there may be different kinds of sources available in the different seasons, but the dead of winter closes down most sources.

Some animals store food for those hungry winter months, but pigeons can’t do that.

So, what do they do?

Although plants and flowers lay dormant during winter there still seed heads to scavenge.

As Mother Nature is an untidy housekeeper, there are still seeds that have fallen on the ground and have been overlooked by the harvest.

Just think of the millions of wildflowers that adorn our countryside and even with the rapturous attention of pigeons and other birds, many seeds will fall by the wayside.

Most will be covered by fallen autumn leaves or snow, but they are still there.

All it takes is determined and industrious pigeons to unearth them.

Even in a small country like the British Isles there are thousands and thousands of farms producing acres upon acres of crops every year.

These include vast amounts of seeds and grains that pigeons depend on.

Despite the modern methods of harvesting, some percentage of those crops will be lost.

Lost to the farmer maybe, but not to the wily and hard pressed pigeons and other avian inhabitants.

Pigeons are intelligent and learn fast, so they know where to forage for hidden food.

Another source of winter fare is nuts. Although tough and not the easiest food to eat, nuts can be a life saver for hard up pigeons.

The good news is that there are many kinds of nuts to be had in the wild, some softer and easier to digest than others, but they will do in a pinch.

Despite the fact that there aren’t many insects about during winter, that doesn’t mean that they aren’t there.

Pigeons will eat insects as a part of their normal diet, maybe much less than grains and seeds, but they won’t pass up a tasty insect morsel either.

The insects that don’t fly away for the winter lay dormant.

Pigeons will know where to find them.

Also, there are insect larvae.

Both can supply much-needed protein during the coldest months.

Winter fruits that have fallen and haven’t been harvested are another source of food.

It is said that pigeons will even take advantage of tree sap, if it is still running after a woodpecker has done its work.

The Wonder of Nature

Although you may wonder how some of our wild creatures cope with those harsh winter seasons, nature does provide, but not in her normal abundance.

Those birds that don’t migrate, like pigeons, have developed all the necessary mechanisms and knowledge to survive.

link to Can You Eat Pigeon Eggs?

Yes you can eat pigeon eggs. Like any other eggs, they can be fried, poached or boiled. Their yolk contains a lot of protein, plus carbohydrates and fat. The problem is you need many of...

Continue Reading
link to Do Pigeons Have Good Eyesight?