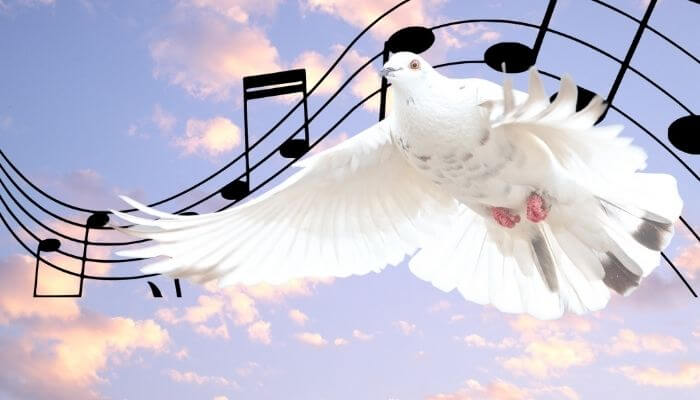 For more than 3000 years, doves have been a symbol of hope and peace for many different cultures around the world, and along with this reputation, they have gained a reputation for being able to produce song.

Doves are not classified as belonging to the passerine or ‘songbird’ group of birds, so doves aren’t officially songbirds. Of course, that doesn’t stop them from producing sounds and noises unique to their species or breed.

The ‘songs’ of any dove breed tend to be very different from the classic high-pitched, elaborate whistling tones that you would most readily associate with birdsong.

Rather than traditional ‘song’, the sounds that a dove emits are much more suitable for the ‘cooing’ noise most associated with the majority of birds in the Columbidae family.

Rather than a drawn-out, multi-noted whistling vocalization, doves coos tend to be more gentle and even melancholic (especially in the case of the aptly named Mourning Dove!).

What Sounds Do Doves Make?

Here are the most synonymous and associated sounds that a dove will make, and the things that said sounds suggest as interpreted by humans observing the behavior that goes along with the sounds.

The closest thing a dove will get to performing what could officially be recognized as ‘song’ is their perch coo.

This is a sound emitted mostly during the courtship ritual by unattached males looking to couple up with a female.

This sound will be made while the bird sits in a conspicuous perch location, and it is a soft ‘coo coo’ sound that is then followed by two or three louder coo sounds for extra effect!

A sound that is most commonly performed by the male of a dove pairing, the nest call is a three-parted coo that is emitted when the birds are in the process of building their nest.

Phonetically it sounds like a coo-OO-oo with the highest note being delivered in the middle.

Females do not generally perform this particular nest call, but they will offer a call of ‘ohr ohr’ when sitting on the nest once it has been fully built and fortified ready for the eggs.

The sounds that doves make aren’t limited to vocalization.

Something that is very noticeable with mourning doves, in particular, is the loud whistling noise that they make when both taking off and landing.

There are a couple of reasons for this whistling sound.

One is that it works to startle any predators that might be close by and planning some kind of attack.

The second reason for the whistling wings is that it serves the function of acting as a warning signal, letting flock mates know it is time to leave the area.

Rather than the wing whistle of the mourning dove, a bird-like the Rock Pigeon will instead produce an audible clap of the wings.

This wing clap is mostly performed by males and is part of the courtship routine.

If a female is near, the male will coo and posture nearby and then take to the air sharply, giving a brisk series of claps as a signal he’s ready to court.

He may also do it randomly when in a flock as a signal of his readiness for courtship even though he hasn’t chosen a female yet.

Other birds known to have a wing clap are the Short-Ear Owl and the European Nightjar.

Both male and female doves tend to make a high-pitched and repeated coo that you can hear all year round, at all hours of the day.

These coo sequences can contain anywhere between one and thirteen rising notes and can be repeated four to five times for minutes on end.

Ground doves, for example, use a version of this extended coo sequence while courting, producing the sound when they are waiting for a mate to return to them, and also when undertaking the process of flushing from a nest.

So, doves cannot sing but they have their own repertoire of sounds – their own form of language and communication.

A dove with an olive branch in its beak is a famous symbol. It’s a depiction that has been used in many ways and has been around for centuries. It appears in many religions as well as in...

Continue Reading
link to Dove Releases: Are They Cruel? Is It Ethical?

It’s something that we have all seen before, whether in person, on the television, in the movies, or as part of a story on the written page. For centuries, the ceremonial releasing of doves...