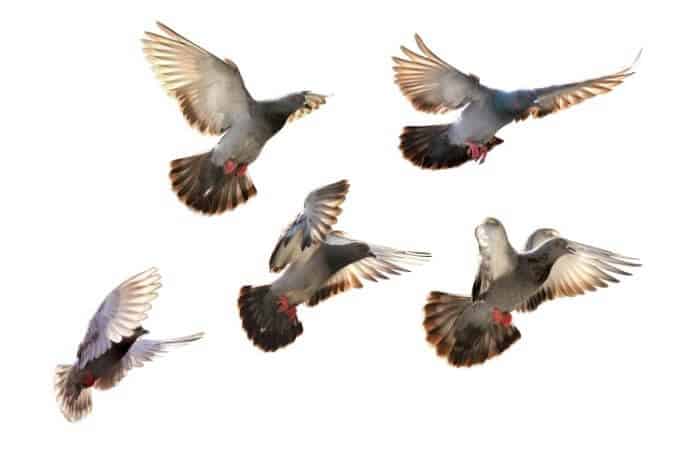 Pigeons do not migrate. While for most birds migration is an innate, instinctive urge yet for pigeons this is not the case.

This is because once pigeons reach a few months old their location is permanently imprinted in their mind as being ‘home’.

Pigeons are also very good at dealing with cold weather which means migration is not as essential for survival to them as it is for other species of bird.

Although no one knows for certain why they don’t migrate, we can make educated guesses.

Here are the some of the most likely reasons:

One thing that inhibits pigeons from migrating is their breeding cycle. Unlike some bird species, pigeons don’t have one annual set season for mating and breeding.

They can breed in both the spring and autumn.

If they migrated to rear their young that would mean two treks, there and back within one year.

This would be an exhausting process for the birds. It is also said that captive pigeons can mate all year around.

Pigeons face all types of dangers when it comes to predators.

They can be attacked by aerial birds of prey, like falcons, owls, and sparrowhawks.

On the ground, predators may be dogs, ferrets, foxes, and snakes, depending on where they dwell.

Then there is the climbing sort of predator, like cats, rats, and humans. Migrating birds face different kinds of predators along their flight and at their destination.

In the case of pigeons, it may be better the devil you know than the one you don’t.

Pigeons have developed ways to deal with cold and harsh conditions.

It may not seem like it, but their plumage is thick and acts as a good insulation against cold conditions.

They also tend to roost together. This isn’t just for protection against predators, but also to share body warmth.

Probably the most important reason is food sources.

Obviously, pigeons can find enough food to sustain themselves in their natural environments, even during the breeding seasons, when they have to provide for their young.

Both the male and female eat what they find and produce what is called crop-milk, which is then fed to the chicks.

As long as these birds can feed themselves and produce crop-milk for their youngsters, there’s no need to migrate.

Those that have adapted to living beside humans obviously have found an abundance of food resources.

Pigeons don’t migrate because they don’t need to.

They have learned to deal with harsh weather conditions where they live.

They can find enough food resources to keep them in one place all year round.

Given the success of their reproduction rate and expanding numbers, they seem to have got it right.

link to Where To Buy Pigeons: 10 Places

Thanks to the internet buying pigeons has never been easier, you can buy them online and get them shipped directly to you. It is 100% safe to ship a pigeon, dealers do this regularly using...