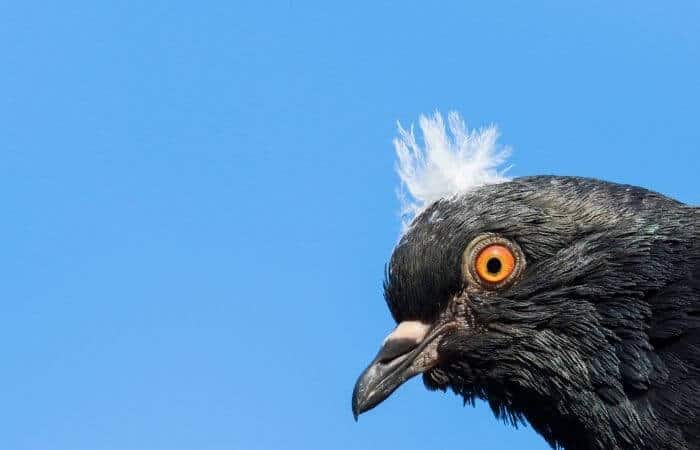 Looking for some jokes about pigeons?

Look no further, below we have curated a list of 37 of the best (and worst) pigeon jokes on the internet:

Why do pigeons bob their heads?

They are working on their lines for a rap battle.

Man: I lost my homing pigeon.

Woman: Why? Didn’t it return home?

Man: I don’t know, we had already moved the caravan before he got back.

Yesterday a pigeon landed on my windowsill with a note attached to its leg. I read the note as the pigeon flew away. The note said:

“I have lost my pigeon. Please help me catch him.”

The UN being ran by pigeons.

“We will invade China. Nod if you agree.”

I hate playing chess with my pigeon.

All he does is poop on the board and then strut around like he won.

I let my pigeon type up a few messages on my phone.

He typed a load of garbage comments but is still blowing up Twitter.

My pigeon takes his impressions too far.

The other day he did an impression of a duck and I found him with his head in the fishbowl.

I lined the bottom of my pigeon coop with newspaper. The birds seem to enjoy it. Or, as least I think they do.

I always see them nodding their heads as they read.

If pigeons enjoy pooping on statues so much, then why doesn’t somebody just make a giant statue of a toilet?

Child: My mum was arrested for feeding pigeons.

Teacher: That is odd, feeding pigeons isn’t a crime.

Child: It is when you are feeding them raw to the old men in the nursing home.

The one-armed pigeon was found unsuitable for moderating the presidential debate.

The pigeon was found to be mostly left wing.

Except no one invites them to weddings.

Smoking must be addictive.

I saw a pigeon pick up the same cigarette butt six times before flying away.

I cross-bred a homing pigeon with an alligator and then lost it.

I bet that decision will come back and bite me in the ass.

How many pigeons does it take to clog up a hotel toilet?

Son: Daddy, I think that pigeon wants to buy your car?

Daddy: Why, did he leave a deposit?

Son: Yeah, all over the bonnet and window screen.

My homing pigeon was terrible. He never came back, he would just fly into power lines.

He is such a crap homing pigeon that he came back as a ghost and haunted the wrong house.

My messenger pigeon was crossed with a woodpecker.

He knocks on the door before delivering the message.

Salesman: This is the best homing pigeon in the world. He always comes back.

Customer: Really? He Always comes back?

Salesman: Sure, this is the 6th time I have sold him.

I crossed my messenger pigeon with a parrot.

The lion statues in Trafalgar Square have literately put the cat among the pigeons.

I walked into the cinema and saw a bunch of pigeons watching the movies.

I asked the projectionist why the pigeons are watching the Harry Potter movies.

He said, “Well, they enjoyed the books.”

Last week a chicken successfully sued a pigeon for crossing the road, for crossing-right infringement.

A guy put up a poster saying, “Lost Bird.”

The text said that he obeys no commands, has no name, and no tag.

The picture was of an ordinary pigeon.

The detail on the wings was amazing.

The pigeon shat on the sheriff.

But he didn’t kill his deputy.

My self-portrait sculpture was so bad that even the pigeons refused to poop on it.

Was there a Greenpeace activist who kept releasing pigeons from the farm, only to have to return every day to do it again?

What is a pigeon’s favorite social media platform?

Well, he has a small brain, dumb opinions, and often gets into a flap about nothing.

My pigeon was arrested for transporting drugs cross country.

I offered to pay bail, but they wouldn’t let me bail him out.

They said he was a flight risk.

Any bird can be a homing pigeon if you tie together enough elastic bands.

Teacher: Yes, sure they are.

Kid: Then why was the crowd so upset when I released a bunch of pigeons at my aunt’s wedding?

Kid: Do pigeons brush their teeth?

Mother: No honey, of course not. Why do you ask?

Kid: Well, they have left blobs of white toothpaste all over your car.

Classroom child: Why did the army use pigeons to carry messages in the 2nd world war, why didn’t they use parrots?

Teacher: Well, if the pigeons were captured, they were worried the parrots would talk.

What’s the difference between divorced men and pigeons?

You cannot lose a homing pigeon.

If your homing pigeon does not come back, then what you have lost is a pigeon

Why did the pigeon cross the road?

It was the chicken’s day off.

We hope you enjoyed these! Why not have a read of our pigeon puns and pigeon quotes too?