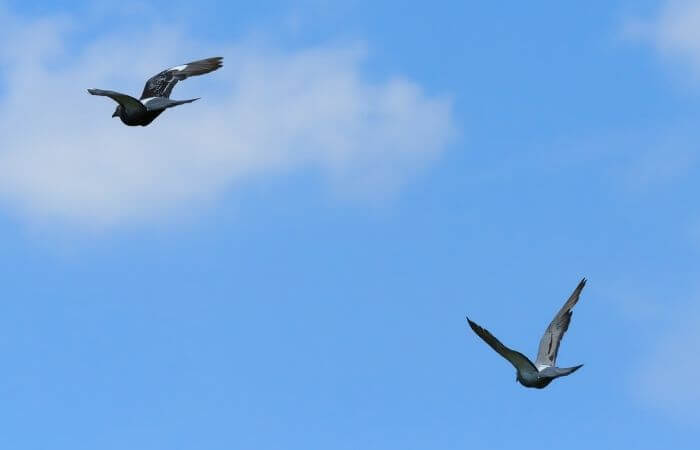 The problem with this question is that it’s hard to find any specific records that define specifically how far a homing pigeon can fly.

This makes it very hard to accurately pin down the greatest distance a homing pigeon has ever flown.

It is claimed that the greatest long-distance flight recorded by a pigeon is one that started at Arras in France and ended in Saigon, Vietnam back in 1931.

There are some known instances of long-distance flights but whether these are one-offs performed by the marathon runners of the pigeon world or they are feats that could be achieved by the average pigeon is not known.

Other than racing or for communication purposes as per their function in wartime, what motives does a pigeon have to fly long distances?

They are not migratory birds, so there’s no genetic switch that says fly far.

That being said, let’s look at what we do know.

The History of Pigeon Racing –  A Not So Ancient Sport

It is believed that pigeon racing started and was developed in Belgium back in the 1800s.

By 1881 the Belgians were organising regular races.

This seems to be the origin of homing pigeon racing.

Although man’s relationship with pigeons stretches back into ancient history and covers many regions, there isn’t any historical record of racing.

Many of the cultures in the Middle East admired and kept pigeons as pets for their beauty, but there are no records about actual racing until it became popular in Europe during the 19th century.

Of course, as with any competitive sport, time and distance became important.

The first official long-distance race was organized in Belgium in 1818. Short races of 10-30 miles became extended until long-distance competitions became the norm.

Pigeon racing was taken up enthusiastically and spread all over Europe (if you’re into racing pigeons yourself read our article here for some racing pigeon tips).

It also crossed the Atlantic Ocean to North America.

This century, the sport has spread to Asia and there are many enthusiasts in India, China, Taiwan, and the Philippines.

Many of the races now flown by pigeons are endurance affairs, fraught with many natural dangers.

It is hard to pin down the greatest long-distance feat, as there doesn’t seem to be any recognized central world-wide authority to consult.

All there is to go on are claims, which may be true or false.

It is claimed that the greatest long-distance flight recorded by a pigeon is one that started at Arras in France and ended in Saigon, Vietnam back in 1931.

Back in the days of the emerging railway system in the United States, it is said that homing pigeons could outfly the fastest locomotives.

One three hour train journey was completed by a pigeon in just over an hour.

The bird flew at an average of 1,200 yards per minute to achieve this.

It is believed that homing pigeons can sustain 13 hours of continuous flight and some of the short distance flyers have been clocked at over 110 mph.

As races are measured by the ratio of time over distance, to work out the average speed of a pigeon and therefore calculate which pigeon flew the fastest, there are different kinds of pigeons for different races.

There are sprinters and marathon fliers. There are other long haul flights, but not races.

One claim is that one bird was bought and shipped to Sri Lanka.

When it was released it flew back to its birth loft in Germany.

Another is of one pigeon that flew from its new owner’s home in America and arrived back at its home loft in Britain.

It is speculated that the bird flew north by way of Greenland to avoid crossing the vast stretches of the Atlantic.

Another record claim in America says that one homer flew over 2,000 miles in 43 days and 10 hours.

Unfortunately, none of them are backed up by evidence.

Nowadays Chinese pigeon fanciers regularly organize races of between 500 to 1000 miles, which also seems to be the average long-distance European race too.

Probably the most gruelling endurance race for pigeons in the world is the MacArthur to Manila race in the Philippines.

It starts in the town of MacArthur on Leyte Island and ends in Manila.

It has a 10-hour duration and it is claimed that only 10% of the birds released make it back to their lofts.

It is the longest distance race at 600 kilometers, but the actual distance isn’t what makes it the toughest in the world.

Natural conditions such as variable winds, three sea crossings and mountains to surmount, plus birds of prey and pigeon poachers, make it the most dangerous in the world.

A good racing pigeon can be worth a lot of money and captured birds can be sold off to unscrupulous buyers.

As in most sports, gambling, both legal and illegal, are part of the background.

Large sums can be wagered, so dirty tricks are not unknown.

Racing clubs and lofts are scattered all over the world and in the absence of a recognized body to verify speed and distance claims, it is impossible to accurately record and compare these birds’ achievements.

Despite the lack of officially recognized records it is hard to deny that pigeons are amazing.